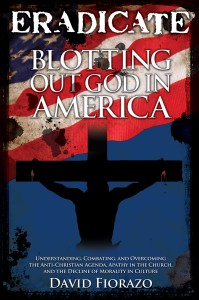 Eradicate: Blotting Out God in America
by David Fiorazo
2012 Non-Fiction
★ ★ ★ ★ ★
The historical and personal significance of Eradicate is profound.  With thorough research as its foundation, David Fiorazo does an excellent job depicting the exact timeline of the moral, social, spiritual, and political decay in America.  I couldn’t put this book down.  I was enlightened, convicted, and moved to actively defend the moral fabric of our society.  Here is my interview with the author David Fiorazo, as he shares his thoughts on the history of America and what we need to do to make a difference. This is a must read before anyone votes in the upcoming 2012 Presidential election.  If you are looking to get informed, this is the one book for you.
——————————————–
SH: When did you first realize that you wanted to write the book ERADICATE – Blotting Out God in America?

DF In 2011 as I was blogging regularly. After years of watching the growing attacks on Christians and secular movements in the country, plus seeing believers falling right into the trap by blending in, I wanted to try and reach more people with truth they’re not getting from the media. I do have to give credit to my wife, Rosanna, who first suggested I write a book. She’s been my biggest encourager.

SH You have a chapter about the last fifty years in America.  What are a few of the most devastating events effecting Christianity.

DF Okay, what happened with this chapter is over the last year as I researched for my book, I came across so much history and so many good links and resources I got the idea to put together a timeline of the last five decades. I’m so glad I did because it’s shocking and stunning to see everything in one chapter like this. Court decisions like Roe vs. Wade in 1973 was huge. In the early 1960’s, the Bible, the Ten Commandments, and prayer were still allowed in public schools.  We all know what happened, but it’s pretty impactful to see evidence of the battle over morality between Christians and secular culture.

There are hundreds of events and my book proves the gradual moral decline so it’s hard to name just a few. Woodstock, the Beatles, the Clinton presidency – in my opinion, the Hollywood agenda as evidenced in movies, particularly ‘Kinsey’ which was about bisexual pedophile and pervert, Alfred Kinsey…they made him look like a hero of sorts; I think morally, Hollywood has done irreparable damage to America. The lack of push-back by the Church and American citizens over abortion funding to Planned Parenthood and other misuses of our taxes; Lyndon Johnson’s 1965 Great Society is a joke if you look at how much money has been spent since then to help the poor in our own country; The takeover of public education by the government in 1979 was the first step in the absolutely wrong direction.

SH In your chapter called, “Soul Pollution”, how would you sum up the main pollutants that Christians must deal with?

DF Look at what was on TV when we were young and how bad it is now. I think the first time the word “damn” was used was 1959, and the first naked butt on TV was in 1994. Today we have nonstop filth on television and in movies. They’ll keep programming garbage, but why do we watch it? This chapter has massive evidence that demands a decision about how we’ll take in entertainment in the future and how we’ll spend our time. They’ll keep pushing the envelope of indecency and the public will be like the frog in boiling water. The FCC is an inept bureaucracy and refuses to protect American children. Government and Hollywood do not share our biblical values whatsoever. You have to set guidelines for what your kids watch and listen to. If Christian parents don’t instill biblical values in children, Hollywood will gladly program them for you! Kids will follow bad celebrity role models and listen to mind-poisoning secular music if you don’t step in with alternatives and solutions.

SH Why did you feel it necessary to write the first chapter on truth?

DF This is where everything begins. Jesus is the Truth, God is perfect, and the Bible is infallible. There has to be moral absolutes or anything goes and anyone can be right at any given time. Our worldview effects every single decision we make and how we see people, culture, and eternity. What could be more important than what our foundation is built on? Without faith in the integrity of Scripture and the truth of God’s inspired Word, our foundation is on shifting sand as the song says. Look at Genesis 1 and John 1: ‘In the beginning, God’… ‘In the beginning was the Word’…Jesus is the Word. He was with God in the beginning and is also the Alpha and Omega.

I just recently had an exchange with an extreme liberal Christian. (By the way, he’d consider me an extreme conservative Christian.) And though we both claim Christianity we both cannot possibly be right. We see the Bible and the person of Jesus differently, we understand sin differently – abortion, homosexuality, social justice, you name it. So what is the real truth? There are too many ideas and definitions of what it means to be a Christian. We have to be grounded and ready to give a reason for the hope that is in us.

SH While doing research for a particular chapter, was there a lot that really surprised or shocked you?

DF I think the word would be disappointed or heavy-hearted, not shocked. There’s nothing new under the sun and evil has been around for a long time. Three chapters that were the most difficult to write – I mean major discouragement and heavy spiritual attacks – were the ones on Margaret Sanger, Socialism in America, and the Normalization of Homosexuality. What did amaze me overall was the massive amount of information available if people really want to know. The anti-Christian media covers up lots of information or omits stories that don’t fit their secular narrative. So if anyone wants to do the research, the facts are out there. It’s sad that we have to do our own citizen journalism in order to get the whole truth much of the time. That’s one reason I fill this book with 381 sources and references for people to see where I got the information and to encourage others to research.

SH What inspired the cover of Eradicate?

DF Jesus. After I wrote the book, I realized He took me on a journey of faith in the last year. The content of the book further establishes and proves the title, that there are those who would love to eradicate God and blot Him out completely. It can never happen, but that doesn’t mean they won’t try. Since they can’t get to God they’ll try to attack His people. The cover depicts the struggle, the fight, and the war. Christians are right smack in the middle of it all. It’s Christ vs. culture and the image of the flag and cross are purposely ominous. That signifies the state of Christianity in our country and leaves the decision up to us and how we respond to the alarm.

SH What hope can you give the audience for the future?

DF Romans 15:13 says, ‘May the God of hope fill you with all joy and peace as you trust in Him, and may you overflow with hope by the power of the Holy Spirit.’ This decaying world is not our final home. It’s important to remember Christ alone is our hope and refuge in times of trouble. America is in trouble in most every way. Psalm 112:6-7 talks about not being afraid of bad news because our hearts are fixed in the Lord and that we refuse to fear because we have a faithful Father who has a plan. This world is temporary, but He is eternal. You and I were created in Christ to do good works, overcome the darkness, and to glorify His name that we may lead others to Jesus. That is the end goal, to hear Him say ‘well done’ if we serve Him faithfully while we were here.

Thank you David for your time and effort in writing this book and sharing your thoughts with us in this interview.  I’m encouraged to be in the front lines with a brother like you who is willing to lay everything down to share God’s truth with a hurting society.  It is the only hope we have. – Lisa

Over the next three weeks, the Sisterhood is giving away three copies of the book Eradicate: Blotting Out God in America.  Comments posted below automatically enters you into the drawing.  If you want to see a more in depth video of “Eradicate”, you can visit David’s blog.

So how about you reader?  What kinds of attacks in society have you experienced?  What can we do about it to make a change?