Where Freedom was Found 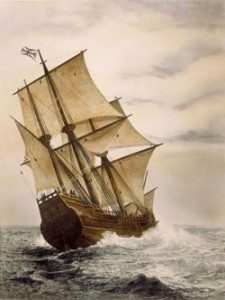 Freedom.  Promised, they did Lord, when we set sail from the tired shores of England.  Freedom from the monarchial ruling of King James, and his fractured beliefs tainted in part by the Roman church, and in part by his love of self rule.  It’ s a cold and brutal 1620 in November.  You are with us Lord.  You must be. We are still here.

While the seas ravaged our splintering cargo boat for days on end, my sickness fell not from the forceful swell of waves, but from the birth of my second child, Oceanus.  A son without country, a birthplace between two worlds: the Old and the New.  May the Lord grant you wisdom Oceanus, to lead a different life my child, one in which is not tainted of falsehoods conjured by men hungry for power and position, but by a life structured by the hands of God himself.

You know our greatest desire Lord was to separate from the Church of England and worship You in a pure and honest way.  The turbulent oppression by those in rank was stronger than this forceful gale that now beckons us to our death.  We would take these frigid winds and biting sleet if it meant living in your presence only.  Here we are, the only way out, this passageway aboard the Mayflower.  It is unfit for life, created for the rank and smell of wine and cargo. But cargo we must be if we are to see a new day.  Cargo we will be if that is your will.

My hope sustains me.  It must.  My hope is in you Lord, a faithful and trustworthy God who beckons us onward. You draw us to a vision of freedom where we can worship and rule as a humble and pious people.  We desire to be led by your unfailing and steady laws  whose color is justly clothed in your endearing mercy and grace.

I see it in my husband’s eyes, Stephen, this hope I do seek.  This hope of a land with God as its governor.  I bid him well, if my own soul may perish.  It is fine by me, for I know him by his actions: a father, who deserted his seaman’s career for a time to return and save his three children, orphaned after his first wife Mary perished at land.  Now I, Elizabeth Fisher Hopkins, wife and mother to five, pray to you Lord, that this continued work you have done in me, in him, in us, may continue upon our generations for years to come.

I pray Lord, that the letter to which these men now pen in blood, may establish a covenant reflecting of your will as seen in your good Word, given to us in the rank and mire dwellings of the outcast.  I pray that it may, in its essence, govern our life between you and us, our God and His creation, and between our brothers.

This is the freedom we seek Lord, that we would not be governed by human corruption and tyranny, but by you, God himself, the One whose righteousness, justice and morality, is incapable of evil. You, King of Kings, our Holiness who alone gives grace freely.  May our walk, our interactions, our future be established and governed by your law Lord, created by the highest of standards, under which is the only chance creation’s life can perpetuate.  Bid us well.  Amen.

These are the conditions of which the Puritans, known also as separatists and Pilgrims, came to our shores in November 1620 aboard the Mayflower, from Plymouth, England, hauling 102 passengers crammed into non-living spaces for 66 days.  It is one reason why we are called “the land of the free and the home of the brave.”   Many have placed their lives at risk by crossing vast oceans, and tattered borders, seeking hope for a new day, a better life.  Seeking to establish a life without corruption, a life where we can work and play, raise our children in the guiding peace of the Lord, and without fear of imprisonment under false judgement and accusations.

The Pilgrims were not the first to touch the land of the Americas.  The Norse (Vikings), Columbus, and Jamestown settlers, all have stories of their own prior to the Pilgrims landing.  Sadly, only forty five of the one hundred and two Mayflower passengers survived the first harsh winter of 1620/21.

While other travelers came to pillage the coastlands for their own gain, these separatists, came in peace and a better way of life.  The Pilgrims didn’t seek to create new laws and a new religion, they sought to establish a new community of people whose lives were transfixed by the glory of God.  Although imperfect, they sought to live a humble life under God’s banner, God’s standard of morality and justice.  They would work, serve, grow, and love under the authority of God.

But you have raised a banner for those who fear you–a rallying point in the face of attack (Psalm 60:4).

He lifts up a banner for the distant nations, he whistles for those at the ends of the earth. Here they come, swiftly and speedily! (Isaiah 5:26).

And it is under the banner of God that the descendants of the Mayflower would grow up and influence the next two hundred years of colonial life, the writings of our forefathers, and the establishment of the United States of America.

There were two defining reasons why the Pilgrims legacy, and not that of any other, influenced our nation’s founding the most:

1. They established their freedom under God’s banner.  As the Pilgrims anchored in Cape Cod, they didn’t disembark waving their hands in the air like mad men chanting “freedom, we can do whatever we want.”  Instead, they knew if they were to survive and exist as a people, they had to establish themselves under God’s way of life and make it a part of their culture.  Freedom to act, speak, or think must be tempered by a conscience driven by a force that doesn’t remove the freedom of others, but places them above their own. The only force that could drive such a righteous life is the Holy Spirit.  They found this power when they laid down their old life for God and found a new one in Christ.  This is the freedom they experienced and sought to share.  It was under God’s banner, His standard, that they learned what a relationship with God and a relationship with man should look like.

2.  They established their laws under God’s banner.  Before the passengers set foot on land, they came together and wrote a covenant establishing the laws to which they were to hold themselves accountable. They didn’t seek freedom from rule all together, they sought freedom from rulers who didn’t place God and His Word and Truth at it’s center and authority.   They knew there was no such thing as liberty without authority.  Our birth alone and dependent nature on others to survive, learn, and prosper inherently makes us accountable to others.  They knew that if we were to be ruled, it was better to be a slave of a merciful God, then a slave to man.  It was better to be ruled by a just Savior, who laid down his life for his people, then by a ruler who used his people for his own gain.  They knew we could not exist without a standard of laws to abide by, because men in their nature were evil and must be restrained and educated.   The hightest standard of all was given to us by God alone as laid out in the Holy Scriptures.

Freedom was found under God’s banner.

In order for the colony to survive, forty one men drafted and signed the Mayflower Compact, a covenantal promise to God and social agreement amongst each other.

In the name of God, Amen. We, whose names are underwritten, the loyal subjects of our dread Sovereign Lord King James, by the Grace of God, of Great Britain, France, and Ireland, King, defender of the Faith, etc.

Having undertaken, for the Glory of God, and advancements of the Christian faith and honor of our King and Country, a voyage to plant the first colony in the Northern parts of Virginia, do by these presents, solemnly and mutually, in the presence of God, and one another, covenant and combine ourselves together into a civil body politic; for our better ordering, and preservation and furtherance of the ends aforesaid; and by virtue hereof to enact, constitute, and frame, such just and equal laws, ordinances, acts, constitutions, and offices, from time to time, as shall be thought most meet and convenient for the general good of the colony; unto which we promise all due submission and obedience.

In witness whereof we have hereunto subscribed our names at Cape Cod the 11th of November, in the year of the reign of our Sovereign Lord King James, of England, France, and Ireland, the eighteenth, and of Scotland the fifty-fourth, 1620.

– The Mayflower Compact as signed on board the Mayflower on November 11, 1620 (modern version).

So did America have a Christian founding?  Yes.  You can read it for yourself in countless biographies, memoirs, and documents drafted by our founding fathers.  When you are troubled by the Headlines of the day, and you wonder what really happened, and what kind of country we were founded on, take some time to discover the richness of your heritage, the stories behind the blood that was spilled for you, and the God who made this life possible.  Don’t ask what kind of world do we live in, but like the Pilgrims, ask: what kind of world can we create?

“We must have laws and rules in order for our basic human rights to prevail. In my view, the Christian religion is the most important and one of the first things in which all children, under a free government ought to be instructed. No truth is more evident to my mind than that the Christian religion must be the basis of any government intended to secure the rights and privileges of a free people.” – Preface to Noah Webster’s Dictionary 1828

As the countdown to the US Presidential election winds down, and voters in America gear up to make a decisive call between President Barack Obama and Mitt Romney, the world will be watching.  Will the balance of power shift and what sort of ripple effect will it create?

We would love for you to join us as we continue to discuss this country we now live in light of the upcoming elections.  What does freedom mean to you?  With freedom comes great responsibility personally, spiritually, and professionally.  Our personal values mold our thinking and either directly or indirectly affect our laws, economy, media, and foreign relations.

We pray and hope you will not be a couch potato Christian, but would live, learn, and act upon the freedoms that have been given to you, and teach your children of what this great nation of God has been built on.  If we want our freedom under God’s banner to continue, then it is up to us to learn about our history, grow in the knowledge of God, and maintain this freedom we have been so privileged to share in.

This month, all those who participate in our discussions will be entered in our weekly drawing for the following give-aways:

the riveting book Eradicate: Blotting Out God in America by Dave Fiorazo

the eye opening book Where Does the Money Go?

So….What does freedom mean to you?