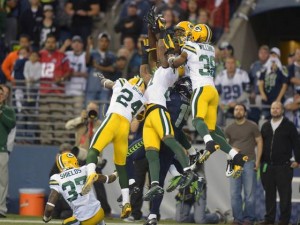 Why NFL Replacement Refs were Doomed from the Start

The #1 Rule in sports is don’t blame the refs.  As a basketball coach, when games come down to the wire, I would normally tell my players and parents, “This is our doing.  That last play wasn’t the deciding factor.  If a game is so close to the wire, you can usually look back and point to a number of other plays that collectively determine the outcome.”  If we lost, there is always a number of things we could have done differently to garnish a win instead.

Alternatively, the Monday night professional football game this week (9/24/12) between the NFL (National Football League) Green Bay Packers and Seattle Seahawks was different.  The penalties called or missed throughout the game were so badly botched up that, in this case, it proves there is always an exception to the rule.

We are in the third week of the professional NFL season and four months into a labor strike between Roger Goodell, commissioner of the NFL, and the NFL Referees Association (NFLRA).  The gridlock bewteen the NFL and the NFLRA over labor disputes and pension plans have left 32 NFL teams in a state of despair.  New referees, with less experience, were brought in to replace those on strike, and it has changed the game tremendously.  The onslaught of poor officiating has created a third team on the field and a battle for fair play.

Anyone who has participated in organized sports understands that referees play a huge part of a game, but they should never ever determine the result of a game.  Wins and Losses should be based solely on the actions and choices of the players and coaches.  When that balance shifts, it’s time to make changes.  It’s time for the NFL and the NFLRA to compromise.  Unfortunately, it’s hard to find anyone in the political and public media landscape these days who can exemplify what fair compromise looks like.

Quarterback Aaron Rogers, in an interview with ESPN, stated,

“I’m okay with replacement refs as long as they don’t have a direct impact on the game.  Obviously last night there was a direct impact and in multiple plays.  I feel bad for the fans.  They’ve paid good money to watch this.  The game is being tarnished by the NFL who obviously cares more about saving some money than having the integrity of the game diminished.”

I met a college referee at my son’s 7th grade football league just last week.  Seems as if it’s hard to find good refs at all levels of play, but for different reasons.  He had to come down a few levels to referee because they couldn’t find good enough young refs who are either experienced enough or willing to put up with heckling from fans.   He gave the lucky few of us sitting at a picnic table on the sideline a very funny and educated eye-opener of the issue at hand during our half-time break: a quick education that has helped me be a better football mom and fan.  He said replacement refs were never going to work because they have three things going against them:

Increased Speed of the Game.  With every level (DIII, DII, DI, Arena, Pro) an official moves up, the speed of the game increases a 1000 fold.  The official can’t adjust to that overnight.  It takes years.  Some never adjust to it well enough to be successful at that level of play and are forced to move back down.

New Team of Officials and Poor Positioning.  Every NFL official works with a team of referees who have been together for years.  They know each other, how each one works and thinks, and have built a relationship of trust and knowledge that can’t be gained overnight.  When you work with a new team of officials, you move as a unit.  Every play is different and the team knows how to move as a whole.  Any time a bad call is made it’s usually because the referee is in the wrong position.  This stems from a breakdown in the unit and a lack of experience working together.

New Rules.  In addition to missing penalties on the field or seeing them incorrectly, the ref must somehow counteract that with a set of rules they are not used to handling.  It’s like using a screwdriver when you should be using a hammer.  It takes time to build up this working knowledge base and apply it at game speed.

We get what we pay for.  If you are surprised and shocked, what else were you expecting? 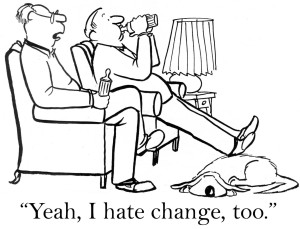 The NFL, the 32 teams, and even the fans should have seen this coming.  You can’t replace professional officials, experts at their “game”, with quick substitutes. It’s like biting into an apple and expecting to taste an orange.  We’ve come to find substitutions of any kind just don’t live up to their real counterparts.  There is a good reason for that, because all other substitutions fall short of the One Real Substitution.

We knew the replacements were not going to be a direct replacement.   The referees are doing the best they can with the knowledge and experience they have. Unfortunately, it’s just not good enough in our culture.  When the labor disputes end, I’m sure everyone will be relieved, even the replacement refs.

It is a little ironic for me as I stand amidst another “political” debate.  2012 must be the year for it.  Earlier, everyone in the world watched as citizens in Wisconsin debated over whether Governor Scott Walker should buckle down on collective bargaining for public unions and even recalled him for it.  If you disagreed with Walker, I hope you now clearly see there is a dark side to unions and collective bargaining.  The side I’m sure Walker was trying to get his constituents to see.  Another recent example is the Chicago teacher’s union strike that left over 350,000 students without a classroom for about two weeks.   The pattern is the same.

There will always be a battle.  In the sports world, this battle is off the field.  I don’t own a “crystal ball” but, I’m sure in the end, the degradation of the 2012 NFL season will leave us scratching our heads, questioning play-off results, and wondering “what-if?”

The only thing I hear everyone chanting now is,”Foul Play!”  At least we agree on something.

If you found this article enlightening, please share it with others. For another article on the best substitution we could ever make, read The Defining Substitution and enjoy the song “Light Up the Sky.”