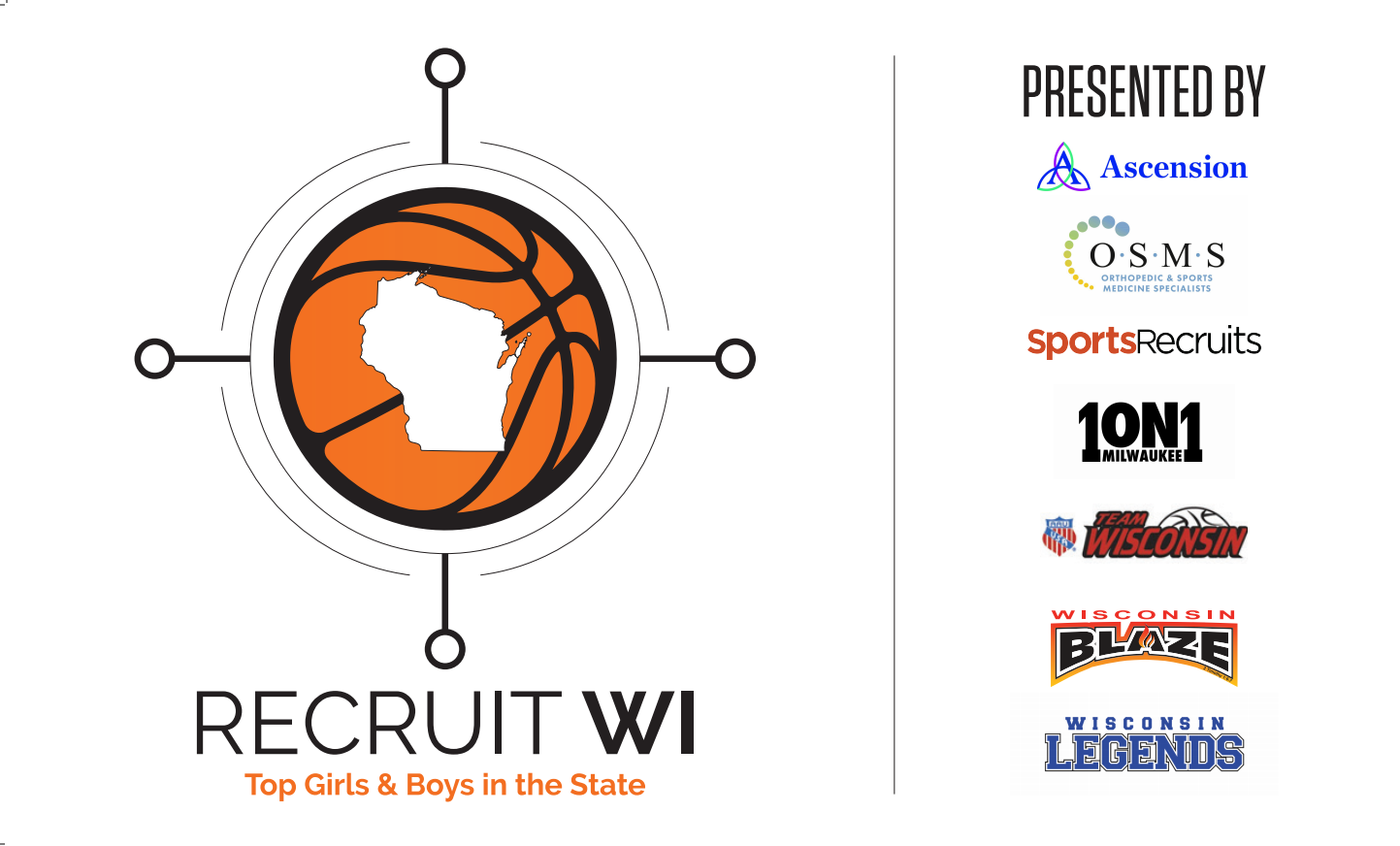 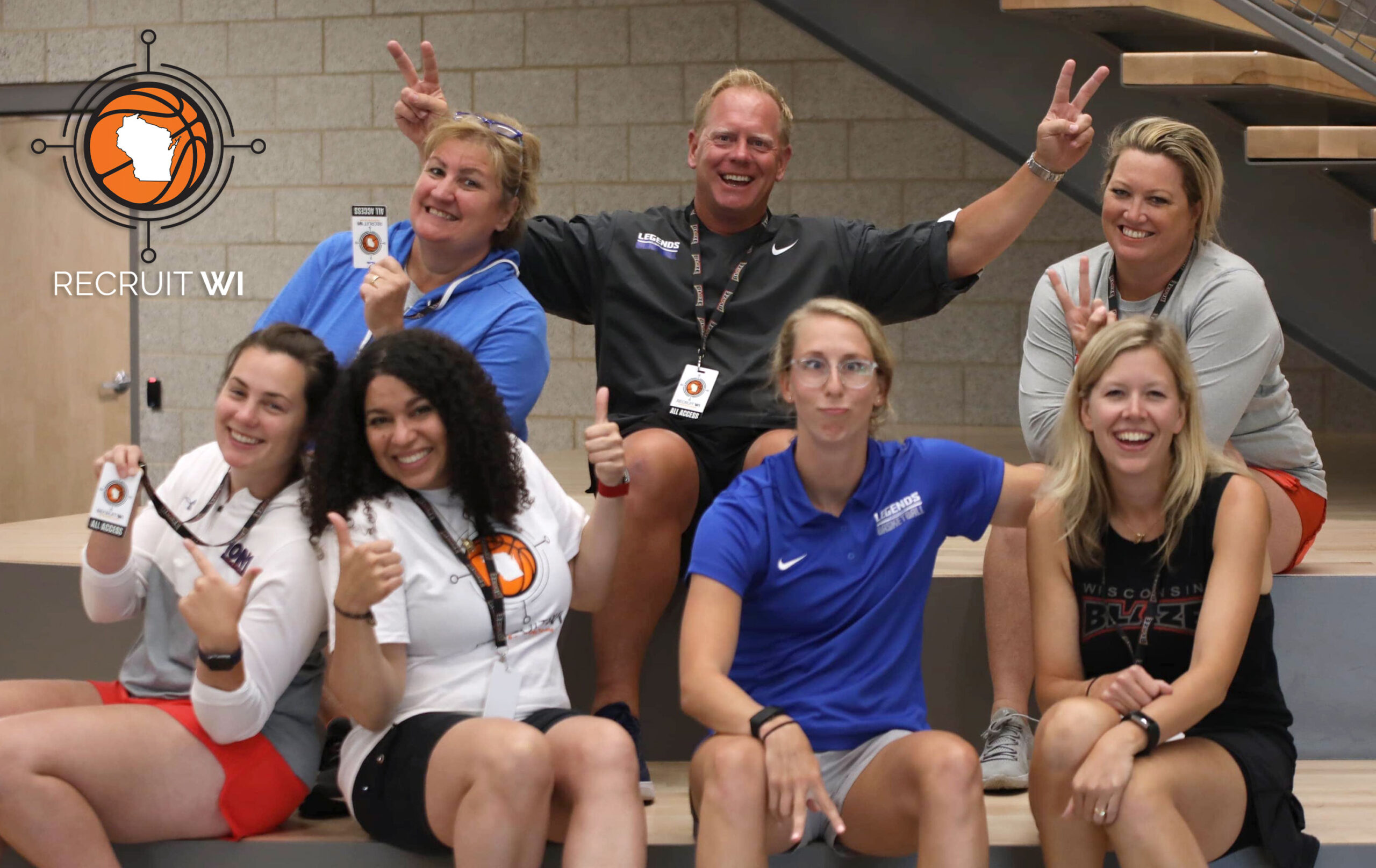 Now in the LARGEST sporting facility in the MIDWEST,

SPONSORED BY SPORTSRECRUITS
THE LEADER IN COLLEGE RECRUITING! 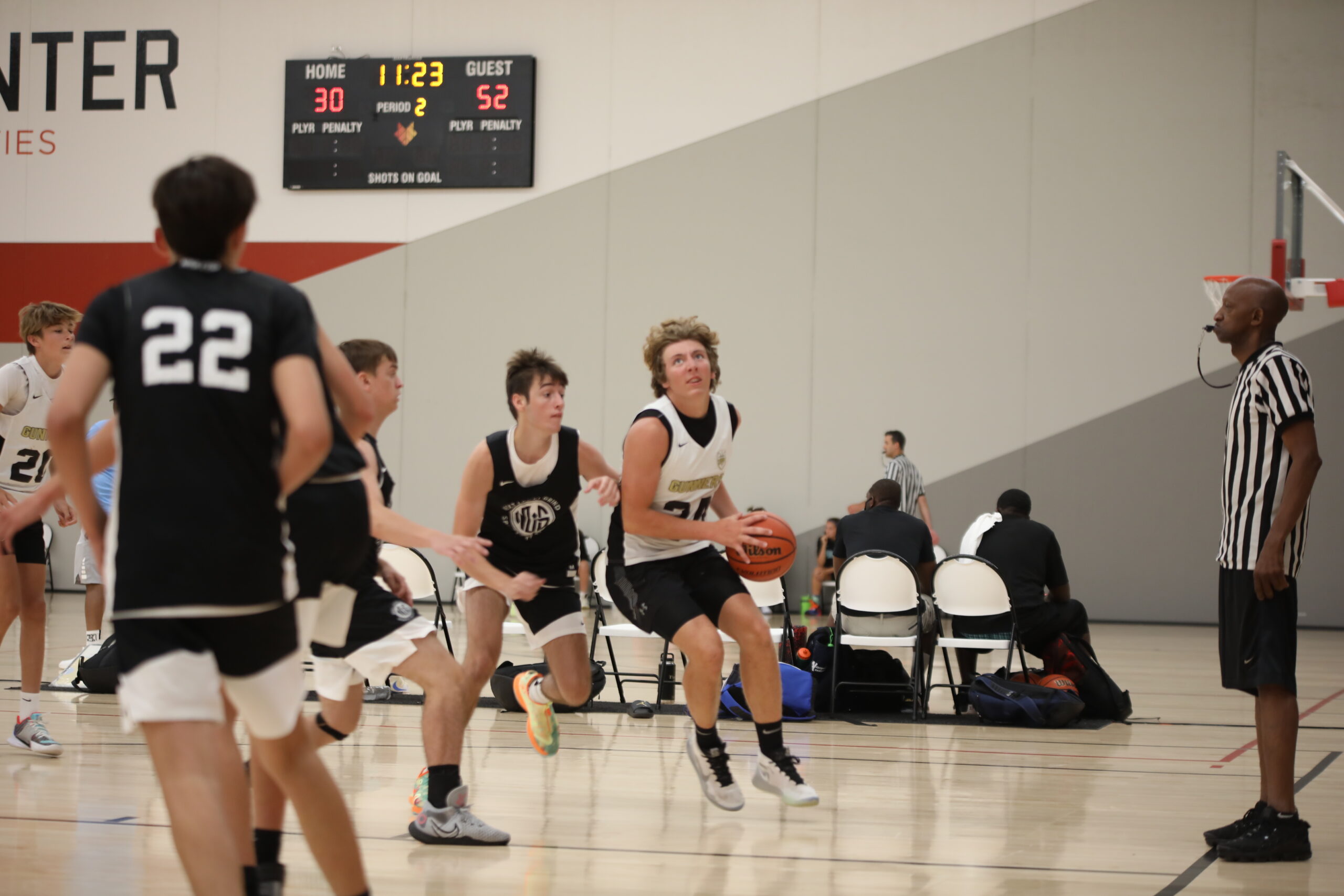 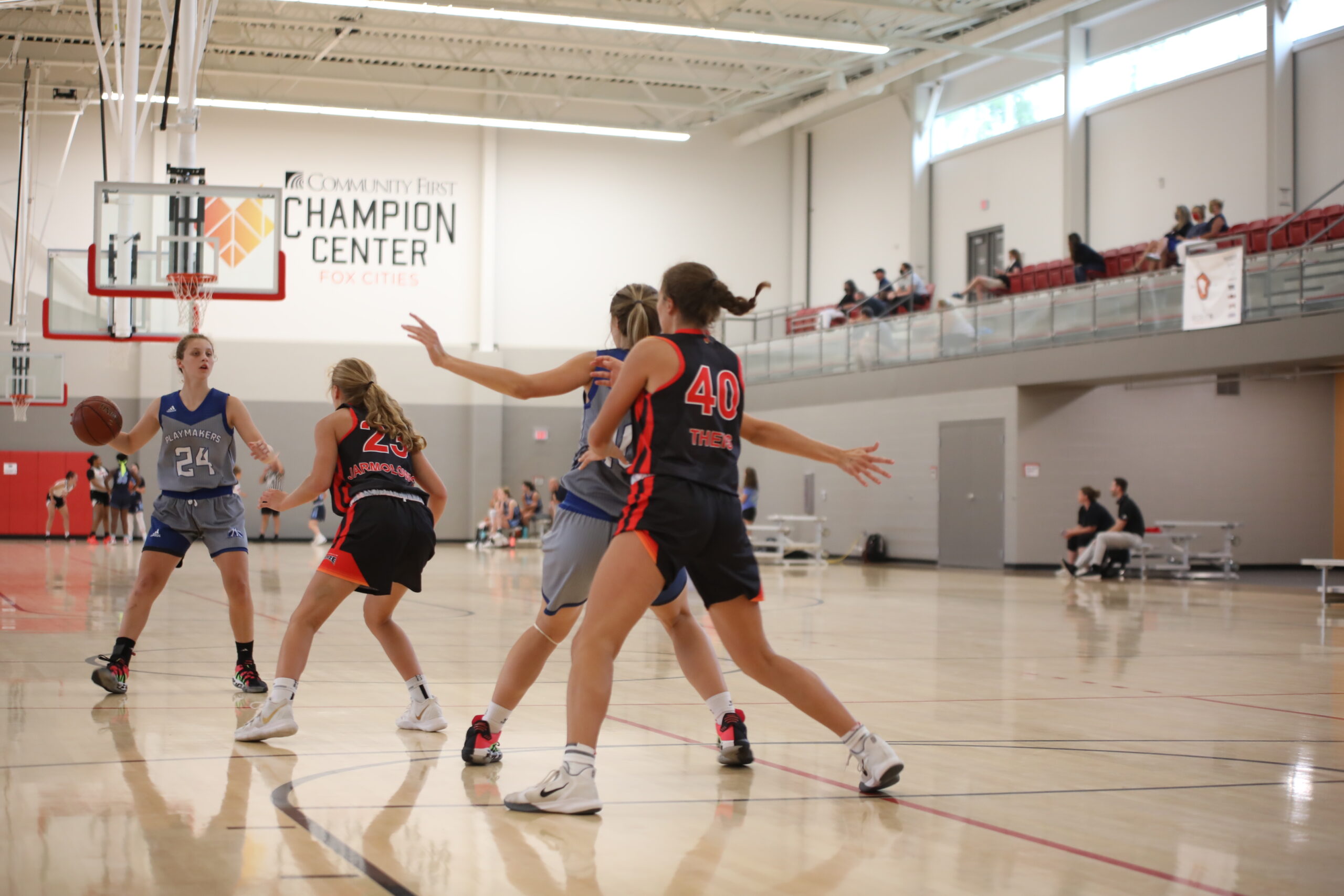 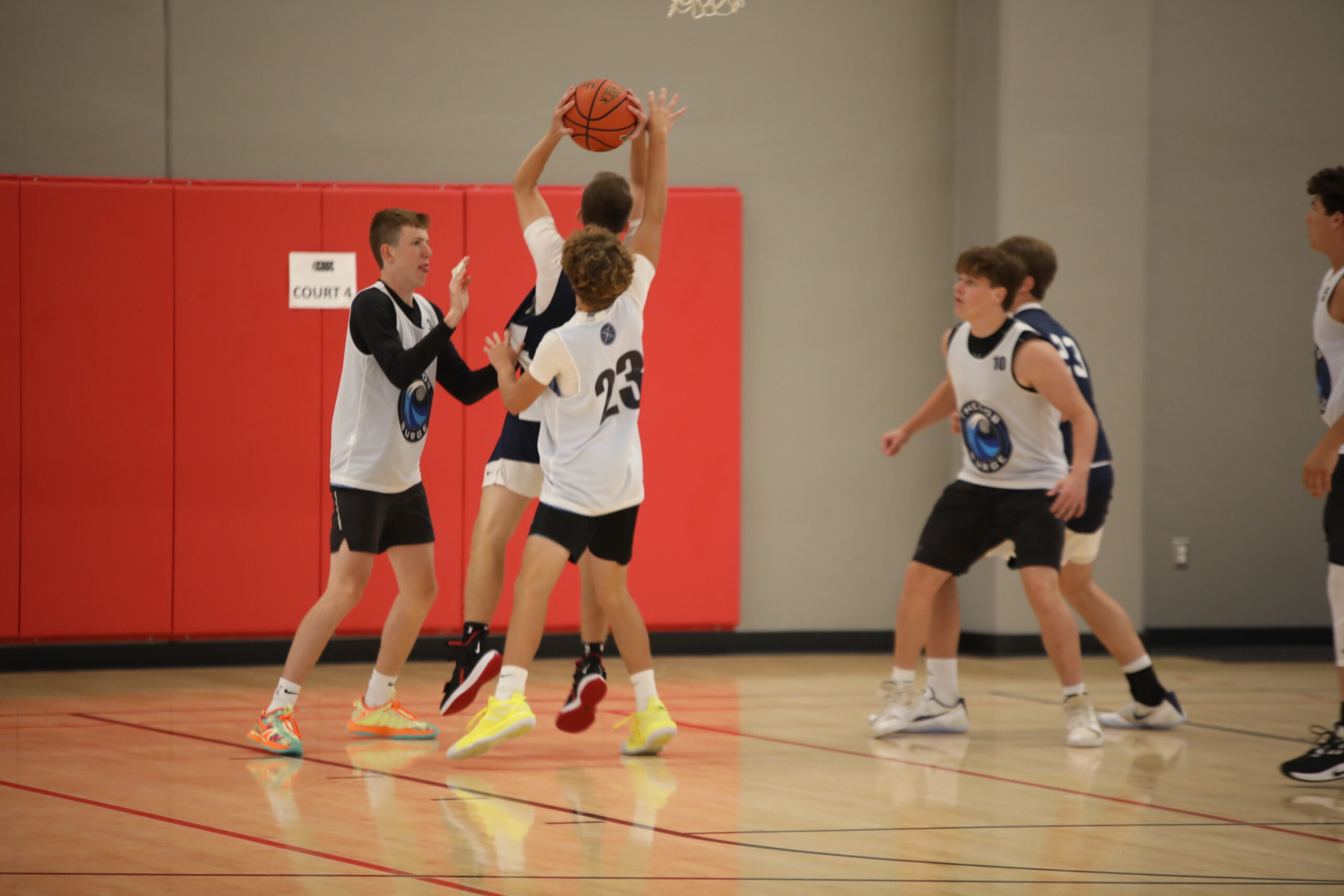 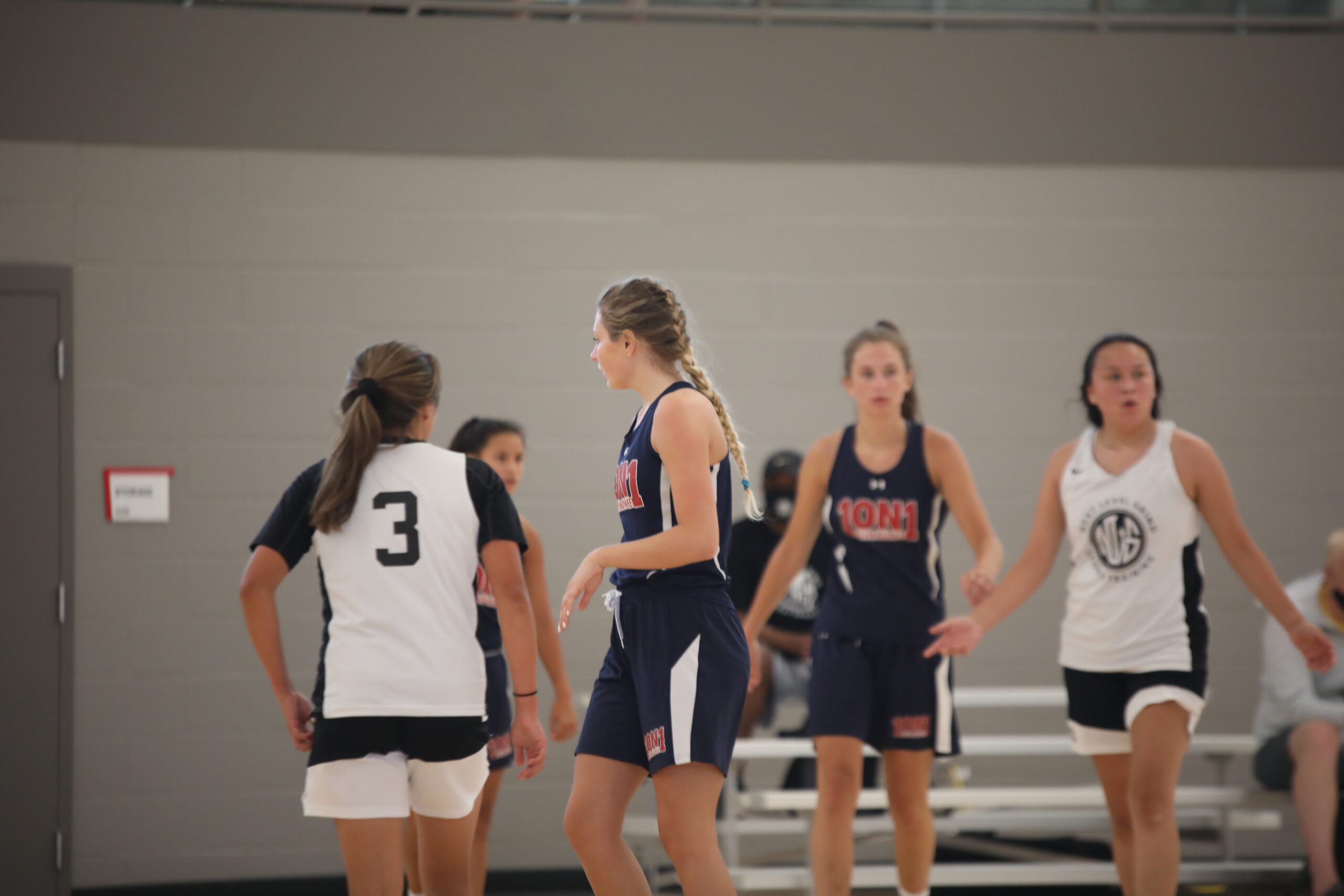 This is a high profile Boys and Girls 7th through High School Basketball Tournament hosted by 1on1 Milwaukee, Team Wisconsin, Wisconsin Blaze and Wisconsin Legends.

SALES TAX (5.5%) will be added to Registration Fee below upon checkout

$25 off each team registration for (3) or more teams registered.

**NOTE: All athlete contact details required so we can provide  SportsRecruits necessary details to create their profiles for the Event Beacon app to be used before, during, and after tourney.

AWARDS: None. This is a showcase format so there are no division winners. We strive to provide as many competitive games as possible.

APPAREL: Apparel will be available for purchase at the tournament and online.

GAMES: SPECIAL ADULT OPEN/COLLEGE/PRO DIVISION
For your teams and pros who need that extra competitive experience
We will provide up to 4 games over 2 days and personalize their experience as needed
Please contact Lisa Van Wyk for special scheduling team@blaze365.com
Team Registration  $250

RW SCHEDULE WILL INCLUDE THE FOLLOWING SETUP: 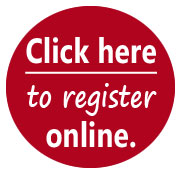 Send payment via Venmo to @Blaze365 and include team names, gender, and divisions

- OR Send note including team names, gender, and divisions

- Checks should be made payable to BLAZE

- Registration spots are not guaranteed until payment has been made.

ALL PARTICIPANTS INCLUDING COACHES, ATHLETES, SPECTATORS, MEDIA, AND VOLUNTEERS AGREE TO THE

This waiver does not need to be signed by participants as registration of your team and participation of all athletes and spectators is agreement to the terms and conditions therein.  This waiver will be distributed to all teams. It is the Director's role to make sure all families are given this information, and Directors and Coaches take full responsibility in acknowledging they have done so.

Sports Recruits is NOW the Official Recruiting Partner of Blaze and Wisconsin Blaze basketball Tournaments! There are many benefits to participating in the Fight For the Fox, Recruit Wisconsin, and Hardwood Hustle tournaments, but if you want to be recruited, or recruit the best, you have to set yourself up for success! Here are all the benefits that SportsRecruits will provide to our participants using SportsRecruits innovative platform and Event Beacon app: 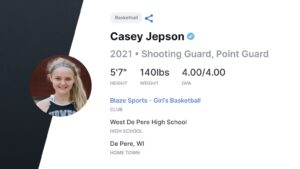 Connect with Coaches
Obtain easy access to basketball programs and their coaches
Email coaches direct!!!
Share all your academic and athletic details including highlight film
Track all your communication in one organized manner
See which coaches have viewed your profile and watched your film

Athletes will be able to update their athletic and academic information leading up to, during, and after the event.

All of the families attending our events will have access to exclusive webinars hosted by the
recruiting specialists at SportsRecruits. They will offer advice about leveraging tournaments and showcases during your recruiting process!

College Coaches will have full access to this information by simply logging in to EventBeacon, a product powered by SportsRecruits. This sideline evaluation tool will allow college coaches to access the most up to date athlete information, build a strategic recruiting schedule onsite, and
focus their recruiting efforts on the players they are most interested in. 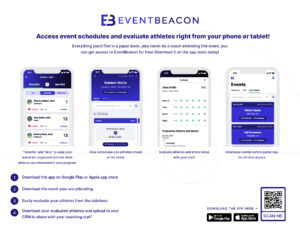 Connect with Athletes
"Favorite" players
Take notes on them
Collaborate with staff!

Access every players'
Academic information
Athletic information
Complete schedule
Access full tourney schedule
Track your "favorite" players in each game
Export your notes and favorite players into any recruiting software you use
If you already have a password set on SportsRecruits, simply go to EventBeacon on your desktop or mobile device and login with your email address and password.
Rules 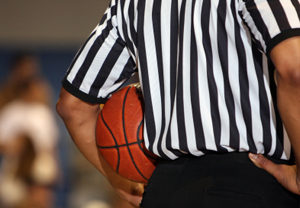 WIAA certified officials will be working each game and NFHS/WIAA rules will be in effect, unless noted below.

The officials will provide one game ball that is cleaned between each game.

Athletes should bring their own balls for warm-ups. Players/spectators will not be allowed to dribble on the sidelines or shoot during breaks. Please communicate to your families that no basketballs should be brought into the gym other than what your team will use during warm-ups. These Basketballs should only be used during that time - not in lobby/hallway or during stoppage in play.

3 minutes (may be shortened as necessary)

Timeouts do not carry over to overtime, but each team is awarded one timeout for the first overtime only.

Players are disqualified on 6th foul.

All days - Regular bonus on 7th team foul. Double bonus shot on 10th team foul of each half.

No pressing if up 20+ points for all Divisions

2 points and the ball; player technicals count as personal fouls; if a player or coach receives 2 or more technicals in a game they are ejected for the remainder of that game. Intentional fouls handled per WIAA rules.

First overtime is 2 minutes with stopped clock. Subsequent overtimes are sudden death - first to score (with no timeouts).

Between the two teams, the winner of head to head competition. 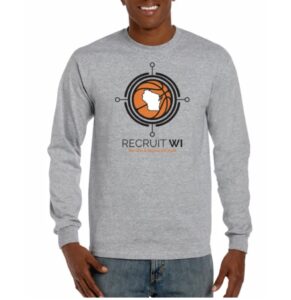 Pre-Order Tournament T-Shirts & Sweatshirts through our vendor, Fine Designs, and your order will be shipped to you!

Fine Designs will be on-site throughout the tournament to print apparel. *Customize your shirt or sweatshirt with your name on the back and/or number on the sleeve.

SPECIAL COACHES SEATING
In Community First Champion Center, Spectators are only allowed in Mezzanine seating
Coaches ONLY alongside courts

Click our special link above If you, your coaching staff, friends, or family cannot attend. You can watch the games at the next best angle in the gym - from the comfort of your own home or office!
All games will begin streaming 3 minutes before Game Times begin.

Even if you will be watching on BallerTV, we still want you to pre-register for special notifications or last minute changes. If you, your coaching staff, or families can't make games, register online for the tournament and we will make sure you receive access - from the comfort of your own home or office!

We have conveniently provided great hotel options for you and your families!

Click on the link to your left to view the Appleton area hotels where we have rooms blocked.

You can reserve individual rooms or blocks right from our Site Search engine!!!

If the hotel link expires or shows no vacancies, please email Elizabeth at admin@sitesearchllc.com so she can give you personal service for you and your teams!

"I wanted to let you know how well run the Hardwood Hustle tournament was.  I go to so many basketball tournaments, all over the country, and this was one of the best.  Many thanks to you and your team for putting on a professional event.  Your facility is amazing as well!  I bet I know who did the drywall!" - JH1 Elite Parent and Administrator

"You guys run one of the best tournaments we've been to and we've traveled all over the country!" - Wisconsin Focus Parent

"Thank you for being available to answer all my questions.  I know you have a lot going on setting up for the tournament, but you always responded in a timely manner. " - Xtreme Coach

"It was great seeing the college coaches watching the games. I know that was extra effort on your part to get them to the tourney.  It's apparent you do care about the kids and put them first." - Blaze Parent

"I've never been to a tournament that gives the coaches free sugar cookies! You're the Best!" - Midwest Magic

"Lisa is such a kind person and has always treated us well, that's why I told our parents, all our teams are going to the Hardwood Hustle this summer." - WI Shooters Director

"I love being able to bring my entire boys and girls program to this event.  It gives us a whole weekend to really support each other while getting great competition." - WI Evolution Director

"Lisa, Thanks for having our team at your tournament. We didn’t fare as well as last year but it gave our boys another opportunity to play without traveling across the state. We appreciate all of the attention to detail that you put into the event." - Northern Heat Coach

"You folks did an excellent job. You should all be commended for what you accomplished for these young athletes.
I am just very pleased that these kids could get out and compete and become better players." - WI Extreme Parent 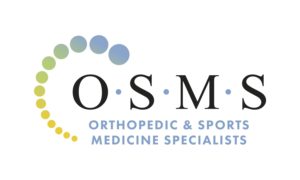